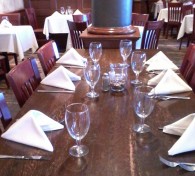 “I told you that was the off ramp,” Jean said.

“Yeah,” Ryan muttered, “right after we passed it.”

Jean and Ryan were celebrating their twentieth wedding anniversary. It would be the first one they had ever celebrated entirely alone. Ten months after their marriage, Jean had given birth to their daughter Meg. And a year later, Ryan Jr.

Both kids were now off to college and Jean and Ryan had decided to try something different. They always went out to dinner on their anniversary, and usually to Gino’s, an Italian restaurant a few blocks from their house. Yet the place had grown rather shabby with each passing year, just like their marriage. And the food was certainly nothing special. Jean and Ryan had heard good things about an Italian restaurant across town, and they decided to try it.

The evening was not going well. By the time they got on surface roads, they were completely lost. They had to stop and ask directions twice before they found the place in a rundown neighborhood on a street packed with cars. When Ryan finally managed a parking place, they had to hike two and a half blocks to the restaurant. Jean was glad she hadn’t worn heels, even if they would have gone better with the dress she had bought for the occasion. It showed off just enough of her, the parts she was still proud of. She had kept her figure over the years, at least most of it, though after two children no woman was quite the same.

The first surprise came when they discovered the restaurant was family-style dining. It was a single large room, roughly barn-like in shape and dimensions. A dozen or more long tables covered with checkered red-and-white tablecloths stretched across the floor with aisles between them. The room was crowded, noisy from many conversations, with waiters moving swiftly back and forth. There was upbeat Italian music playing in the background.

Jean was disappointed. She had envisioned a quiet little hideaway, a booth to themselves, candlelight, and soft music.

“It’s certainly not romantic,” she said over the din.

Ryan shrugged. “Well, as long as we’re here,” he answered in his halfhearted way. “And everyone says the food is good.” Ryan was halfhearted about most everything. Jean once thought she might change him, but she had given up years ago.

A waiter approached. He was wearing a white shirt with the sleeves turned up and an unbuttoned black vest. “Sit down. Sit down,” he urged in a thick accent, handing them two menus and gesturing toward the table closest to the door, the only one that wasn’t full.

They began to take seats at the end of the table. At least they’d be partly alone, Jean thought.

‘No, no, move down,” the waiter insisted, shooing them forward with his hands. “All the way down, please!”

Ryan naturally complied, and what was there for her to do but follow. The table was already a third of the way full. They ended up sitting next to a group of people of all different ages, including children, that nevertheless seemed to be together. Some sort of extended family, Jean thought. They were all engaged in an animated conversation that spread the remaining length of the table. And they were speaking to one another in Italian. Although their food had not yet been served, several wine bottles and glasses were scattered across the table, and they were drinking steadily, or at least the men were. Entirely in their own world, the group seemed oblivious to the new arrivals and took no notice of them. Though when Jean glanced in their direction, one of the children made a face at her.

The man sitting next to Ryan, on his right, must have been in his seventies if he was a day. He was entirely bald, and there was a large growth—some sort of carbuncle, Jean thought—high on his forehead. She would have to avoid looking at him once she began eating. Despite his age, he was one of the most vociferous of all. He kept gesturing down the table and shouting to be heard. The man sitting next to her, on her left, was much younger and less vocal, though he would often laugh loudly at something the older man or someone else said.

Jean slipped her coat off and let it fall over the chair behind her. It left her arms bare, and with its V-neckline and the help of a push-up bra, gave a hint of cleavage. Ryan was examining the antipasto dish already on the table before them.

Jean glanced around. The only thing romantic about the place was the lighting. The entire room was dimly lit. As she looked up, she realized it was not by intention. A series of track lighting ran overhead across the high barn-like roof, though much of it appeared to be burnt out. One bulb flickered fitfully as if it was about to join those that had already expired.

“Guess we’re supposed to start,” Ryan said, picking up an olive and popping it into his mouth, then selecting and chomping on a piece of celery. He gave the menu a quick glance up and down. “Prices aren’t bad,” he said.

“And it certainly seems authentic,” he added.

How would you know, Jean thought, you’ve never been to Italy? Couldn’t he ever say anything interesting?

Jean opened her own menu and began examining the choices.

Suddenly she felt something and started. She couldn’t believe it! The man sitting next to her had reached beneath the table and put his hand on her leg. She should have said something right then, but she was too startled to react. The hand was not only on her leg, it was moving up and down with its fingers curled around her thigh. Jean was shocked, yet in spite of herself, all at once she felt excited. It was the first time anyone had made sexual advances to her since Ryan’s awkward scenario in their senior year of college.

As far as she could tell, the man next to her remained totally absorbed in the conversation. He hadn’t even looked at her, but his hand kept moving. Did he do this to any strange woman who sat down next to him in a restaurant? She’d often heard about how aggressive some Italian men could be, pinching women in the street, making lewd suggestions. Now she would have her own story to tell.

Jean chanced a glance at him. He was mostly turned away, but from what she could tell he was darkly handsome, with an olive complexion and shiny coal-black hair. He reminded her of a movie star, Andy Garcia, or that actor who had starred in The Mambo Kings.

“Have you decided what you are going to order?” Ryan asked, leaning across the table to be heard. He would order spaghetti and meatballs. That was all he ever ordered at an Italian restaurant.

Jean stared at the menu, not seeing a thing, only aware of the hand moving up and down her thigh.

“Not yet,” she managed. “Maybe the lasagna.”

“Oh, I didn’t see that one,” Ryan answered, picking up his menu again.

She would reach down, she thought, and firmly remove the man’s hand, making it clear that she was not interested in his attentions. But the moment she touched him, the man slipped his hand from under hers and placed it on top. They were now holding hands.

And the next thing she knew, he had taken her hand from her own thigh and placed it on his, all the time pretending to be involved in the group conversation. He even removed his hand from hers to gesture as he made a comment that was greeted with a round of laughter and some applause.

Now all she had to do was lift her hand away from his leg and the incident would hopefully be over without an unpleasant scene. Yet before she knew what she was doing, Jean found she was massaging the man’s leg the same way he had massaged hers. She realized she was terribly excited, and terrible was the word for it. She was afraid she might have an orgasm right there in the restaurant. What if she cried out?

She was also feeling flushed, and it must have shown, because Ryan was looking at her strangely. “Are you all right?” he asked.

Jean heard someone clearing their throat loudly over her left shoulder, as if they were trying to get her attention. She thought it must be a waiter, and she hadn’t even decided what she was going to order. She turned her head. It wasn’t a waiter.

A tall woman stood there, darkly beautiful in the same way the man sitting next to her was darkly handsome. She was wearing a dress much like Jean’s, only it looked far better on her.

“Madam, you are sitting in my place!” the woman announced indignantly.

Several heads at the table turned, including that of the man next to her, whose mouth fell open in surprise. Jean realized he didn’t look anything like Andy Garcia.

“And please,” the woman said in a louder voice, loud enough so that the entire table and those beyond must have heard, “take your hand off my husband’s leg!”

Bruce Boston’s fiction has received a Pushcart Prize and been a finalist for the Micro Award and the Bram Stoker Award (novel & short story). He’s published more than 150 short stories and the novels The Guardener’s Tale and Stained Glass Rain.

WHY WE CHOSE TO PUBLISH SITTING DOWN ON THE WRONG SIDE OF THE TABLE:

Bruce Boston wastes no time bringing us into his story with conflict in the first two lines. He slowly weaves his unassuming tale as he unveils his two equally unassuming characters. He keeps us firmly in tow throughout with subtle storycraft that shows, not tells, right up to a perfectly wrought, smile-inducing ending.

THE LIBRARY PATRON by Linda Adams

A TRAGEDY IN THREE APPS by Kat Norton

THE BOY by Shahid Khan

THE AFTERLIFE OF JACKSON by Andrew Atkinson