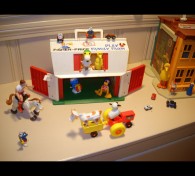 Tommy sat on a stump in the woods watching the girls play hopscotch. His big sister Carla was one of them, and she had told him to get lost. Carla was in first grade; that was why she bossed him around. However, he wanted to be with them, so he hid in the woods as close as he could and spied on them. He swung his legs inside the itchy jeans that were too long—new blue jeans—and hummed to himself as he played his number game: one boy on a stump, four girls playing hopscotch, one man watching the girls play, and one white car. Studying the numbers on the white car’s tag, Tommy made up a farm family, like old McDonald. He pictured four pigs, three horses, one daddy, one momma, two children, two dogs, and seven cats, or even better: four grunting pigs, three little horses (just the right size for him and Carla to ride), one daddy, one momma, two children (him and Carla), two dogs (a big one for him and a little one for Carla) and seven cats. He could see the group standing in the back yard to have their picture taken at Christmas. They were all smiling, even the horses and the cats, but not the pigs. He didn’t think pigs could smile.

Tommy eased off the stump and stepped cautiously closer. He wanted to hear what the girls were saying. A few twigs cracked under his sandals, but no one else heard it. The man, who had been leaning against the back of the white car, approached the girls and spoke with a daddy voice that was easy to hear. The man wanted to pay some money to one of the girls to do a job. When no one wanted to do it, he said he’d buy them some ice cream. Carla said okay, and she went to the white car with the man. The daddy-man and Carla got in the farm-family car, and they left to get some ice cream.

After a while, the three remaining girls quit playing and left, and Tommy played hopscotch by himself until he got hungry and walked home on the shortcut through the woods. A police car, a black-and-white-killer-whale car, sat on the road in front of his house. Inside, his momma was crying and upset, and after she hugged him, she sent him to his room. He wished his momma wasn’t unhappy.

He was hungry, so he didn’t stay in his room very long. Instead, he went to the kitchen, and there he found a big policeman in a blue uniform with a gun. A real gun. The policeman glanced at him and then turned back to listen to the answering machine. Tommy stretched up to open the refrigerator door and peered inside. He didn’t see anything good to eat, but he took the grape jelly to the table to be close to the peanut butter. Then two policemen listened to the same message played again, and Tommy told them that was the daddy-voice on the phone. The policemen turned to him when he said that, and he was a little bit scared because the policemen were big.

They asked Tommy questions, but he didn’t know how to say what the man looked like. He was a grown-up man with a white car, that was all, and then they asked where the man went, and he told them the man took Carla to get ice cream.

When his momma came into the kitchen, he asked her to make him a P&J sandwich, but she didn’t.

The policemen asked what kind of car it was, but he didn’t know; it was just a white car, he told them, with a farm family tag. What was that, they asked.

He told them, “Four pigs, three little horses, one daddy, one momma, two children, two dogs, and seven cats. Now will someone make me a peanut butter sandwich?” But his momma didn’t even hear him.

“Now, Sonny, you’re making that up,” one of the policemen said with a frown. “Tell us the truth! Did it have ‘Alabama’ on the tag?”

Tommy didn’t know, so he kept quiet. He was still a little bit afraid of the policemen.

“Yet,” said the other, rubbing his arm, “wait. Four-three is Lee County. Son, tell me again the farm tag.”

Tommy told him and got out some bread to make his own sandwich. He was very hungry now. He found a knife in the drawer and began, but when his momma saw what a mess he was making, she took it all away from him and, finally, made him his sandwich and gave him his cup with milk, a cap on it, and his green straw sticking out. He left the noisy kitchen and went to the family room.

Sitting on the sofa, he watched Barney on TV, drank his milk through his green straw, and ate his sandwich. Before Barney was over, Carla walked into the room and ordered him to move over because she wanted to watch something else. “I hate Barney,” she said. “Barney is for babies.”

Tommy wiggled over, trying not to spill his milk, to let her sit in the middle of the sofa, and Carla changed the channel to Batman and Robin. His momma came in, sat down, and put Carla on her lap to hug her.

It was strange; his momma had never watched Batman and Robin with them before.

Jo Wharton Heath was once a mathematics professor and is now a writer. She has published one novel, Sarah’s Alice. Jo lives in the woods with her husband, Bob, just across the interstate from Auburn, Alabama.

WHY WE CHOSE TO PUBLISH THE FARM FAMILY:

In our opinion, writing from a young child’s point of view is one of the hardest challenges for an adult. Jo Heath amazed us with her ability to present every story detail exactly how we’d expect a young boy to view and understand his world, right down to the ending.

Some writers might have felt the need for a smoother transition at the end, with perhaps the return of the police and a tearful reunion between mother and daughter–not realizing that the point-of-view character, so engrossed in watching TV, would not have observed that, nor cared if he had noticed. Instead, the author shows us precisely what he would notice: the unwelcome appearance of his annoying older sister and his mother’s uncharacteristic behavior of watching TV with them.

This story could have been told in a dozen different ways and points of view. We doubt that any would have made it nearly as touching as Jo Heath did by showing it through the eyes of an innocent little boy.

THE LIBRARY PATRON by Linda Adams

A TRAGEDY IN THREE APPS by Kat Norton

THE BOY by Shahid Khan

THE AFTERLIFE OF JACKSON by Andrew Atkinson