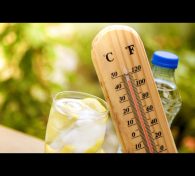 From a cool vantage the man watched the boy use his weapon in heat of summer day. “Look at him go,” he said to no one, his voice a fragile thing.

The boy moved in somewhat a pattern, swaying the weapon back and forth. Sweat soaked his T-shirt. By some miracle, salt water missed his eyes, his brow umbrella.

“Look at him go,” the man repeated, with the same level of fragility and a hint of admiration.

“You still watching that boy?” called a voice from the kitchen, his wife, Maria.

The man said nothing. He kept his eyes on the outside person, swaying, weapon in hand, slicing tops off patches of green.

Maria joined him and stood near. She put a hand on his shoulder, “Sure is hot out there.”

“Seems so fruitless though, to cut the whole lawn with that.”

“Yeah, but a weed wacker? Isn’t that more difficult?”

“I’m not…” She let herself trail. She knew what she meant.

“Besides, he’s doing a good job,” he continued.

“No, that’s the sun, not worked-up sweat. That’s sun-beating-you-down sweat. Sun’s so hot you barely need to be out there to get drenched.”

“Don’t seem to bother him none.”

The man squinted. “At this rate he’ll dehydrate soon enough.”

“Well, he should take a break.”

“Sometimes you get on a roll and—” he stopped himself. “Why don’t you offer him a drink?”

“I’m not going out there in that heat.”

“Would be mighty nice of you and I’m sure he’d appreciate it.”

Maria left him and returned to the kitchen. “We got lemonade!” she called.

Maria poured a half glass and headed outside. She grumbled from the kitchen to the front door.

She heard the direction but said nothing further.

The man watched her walk from their yard and cross the street.

The boy noticed her right away. Her shadow preceded her. He shut off his weapon and spoke first. Then she spoke and handed him the glass. He nodded in boyish faction, thankful and quiet, a tiny smile across his face. He took the glass as if it were precious and drank in one smooth motion, pausing at the apex to gulp down the beverage, every last drop. The boy returned the glass and thanked her. Then he wiped his brow. The sweat flew from the back of his hand like blood from a sword. It salted the nearby grass. The man could see the salting from where he sat. One motion, inaudible drops. Yet the man could almost hear an empty, metal like sound. It briefly brought him back.

Maria hurried back across the street and the boy restarted his weapon. The sound of summer resumed.

The man smiled. “Right back to work.”

Maria reentered with a huff. “There,” she said, “the deed is done. Boy it’s hot out there.”

He ignored the observation. “Is lunch ready?”

She shut the door and set down the glass. “Almost. You can come to the kitchen table if you want. Everything’s in place. Or do you want to keep watching that boy work?”

The man thought for a moment before finally saying, “No, I’ll sit at the table.” He turned himself, “I almost feel like I don’t deserve to eat, seeing that boy work so hard out there.”

She went to him. “Don’t say things like that.”

He smiled a valiant smile.

“Hmm,” he sounded, head returning from an outside glance. “Oh it’s nothing.” He thought a moment. “It’s just in some way he reminds me of me.”

“Well that’s worrying,” she joked, turning, grabbing the glass, and heading back to the kitchen.

He smiled a weak smile, thinking of others no longer living, thinking of saluting the boy’s outside effort, thinking of many things of the past, a time before pants were tied at the knees. His mind went places, before finally he wheeled himself toward the kitchen.

Rickey Rivers Jr was born and raised in Alabama. He is a writer and cancer survivor. He likes a lot of stuff. You don’t care about the details. He has been previously published in Fabula Argentea, ARTPOST magazine, the anthology Chronos, Enchanted Conversations Magazine, (among other publications). Also storiesyoumightlike.wordpress.com/. You may or may not find something you like there and that’s a promise. Twitter.com/storiesyoumight

WHY WE CHOSE TO PUBLISH “Window View”:

From an unassuming title, this tight piece by author Rickey Rivers delivers a totally unexpected and resonant ending that perhaps gives us pause to look through the windows of our own lives.

SHE IS MEDUSA by Tim Kidwell

WHENCE WE CAME, WHITHER WE GO by William L. Spencer